If you, like us, were left on the edge of your seats after enduring multiple minor heart attacks while watching Netflix's new Korean horror series, All Of Us Are Dead, well... we know exactly why you're here.

The show, likened to the streaming platform's other viral Korean horror series Squid Game, shot straight to number one in a matter of days—and for a good reason.

Featuring a talented young ensemble cast, the show follows a bunch of teenagers who get caught up in the first wave of a zombie apocalypse, which originates from a flesh-eating virus that rips around their high school.

Between the gore, jump-starts and pure terror, each episode reveals more about each character, and their fate. That's why after watching it, all we want to know is whether there'll be a second season—because that cliffhanger ending was practically screaming for round two.

Will there be a second season of All Of Us Are Dead?

At the time of writing, Netflix has not yet confirmed a second season of All Of Us Are Dead. That said, "yet" is the operative word here—if the streaming giant's track record is anything to go by, the show's viral success will be the clincher to give it the green light.

Indeed, while Squid Game creator Hwang Dong-hyuk was adamant at first that the series wouldn't get a second season anytime soon, the sheer popularity and demand for it far outweighed his original plans, and a second season was fast-tracked.

"I almost feel like you leave us no choice! But I will say, there will indeed be a second season," the creator said at the time.

That said, All Of Us Are Dead director Chun Sung-il isn't without his own hesitations—the new series was based off a comic, named Now at Our School by Joo Dong-geun. According to Forbes, the first season covered all the source material, meaning the second season will need to be written from scratch.

Given its popularity, we have no doubt the extra effort with be entirely worth it, so fingers crossed they announce it soon.

What will happen in All Of Us Are Dead season 2?

The second season will explain what happened to the surviving High School teenagers after they meet their former friend and half-zombie, Nam-ra in the season one finale.

In that final scene, the group gathered on top of a building four months after the zombie virus began spreading, having seemingly escaped infection as the city begins to return to a new normal.

There, Nam-ra, who only has partial Zombie qualities, tells them there are "more like me" out there before warning them all "they're back" and jumping off the building, leaving her classmates in shock.

One of the most intriguing things about this final scene is that Nam-ra seems to have supernatural powers after being infected by the weaker variant of the Zombie virus. Does that mean that those she referenced as "like me" also have those same qualities? And what does that mean for the students? We're sure to find out in the second instalment.

The season one finale also shows local authorities investigating the family members of the student's high school science teacher, who invented the virus. Whether this is to help them develop a vaccine to quell its spread, or to duplicate it as a weapon in potential warfare as the flesh-eating epidemic continues is anyone's guess.

Who will star in All of Us Are Dead season 2?

Expect to see all the actors who played the surviving students in season one return. Cho Yi-hyun will return as Nam-ra, while Park Ji-hoo will play On-jo and Park Solomon as Su-hyeok.

Of course, one person who most likely won't reprise their role in season two is Lee Yoo-mi, who you'll likely recognise from Squid Game as Player 240. In All Of Us Are Dead, her character Lee Na-yeon does some pretty shady stuff. We later discover it's because she's an incredibly lonely person who projects her dark and disturbed thoughts on others.

Her character is eventually killed after she contracts the virus and gets wiped out by a military bomb, however due to actor Lee Yoo-mi's newfound popularity (her Instagram following has grown from 40,000 to 7.1 million following the release of Squid Game and All Of Us Are Dead) perhaps she'll return from the afterlife in both shows—stranger things have definitely happened.

When will All Of Us Are Dead season 2 be released?

If the second season gets the go-ahead from Netflix in the next couple of weeks, we can expect a second season to be released either late (very late) this year, or in early 2023.

As mentioned, the entire season would need to be written from scratch since the first instalment used all the material from the comic it was based off of. Filming usually takes a couple of months, with post-production also taking anywhere between two to six months.

Here's hoping it gets the green light soon so producers can get started.

You can watch All Of Us Are Dead on Netflix by logging in or signing up here. 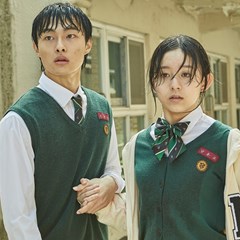 Praise Be, The Third Season Of 'Never Have I Ever' Now Has A Release Date

‘Sweet Magnolias’ Has Been Renewed For Season 3, Here’s Everything We Know (So Far)

The Trailer For Sienna Miller's New Series, 'Anatomy of a Scandal' Is Filled With Bombshells

Turns Out, Netflix's 'The Royal Treatment' Was Filmed In New Zealand