If Jennifer Lopez and Ben Affleck's rekindled romance in 2021 wasn't enough to make you nostalgic, allow the couple themselves to remind you of the iconic romance they shared between 2002-2004.

Per J.Lo's latest newsletter, Affleck surprised her with an early Valentine's Day surprise in the form of a video filled with throwback clips of the pair's early days of romance, all to the soundtrack of the actor's new single, On My Way.

There's actually an even deeper meaning behind this (Affleck really pulled out some stops), because the song is from J.Lo's new movie, Marry Me, which she performs as a love song when she's working out which of two possible suitors she'll actually end up with.

Of course, the difference here is that the singer ended up with her original boyfriend in real life, and as she describes in her newsletter, the clip is deeply personal.

"Watching it made me think about the journey of true love, its unexpected twists and turns, and that when it's real, it actually can last forever. This seriously melted my heart," she said.

As you can see, the video is filled with candid moments from behind the scenes of their early 00s relationship. There's also a glimpse of Affleck's cameo in Jenny From The Block. The nostalgia is real.

The pair have gone from strength to strength after reuniting in 2021. In December, Affleck reflected on the fact that, to quote him, 50 per cent of the reason they split back in 2004 was because of negative media attention.

"The idea that people hate you and they hate you together and that being together is poison and ugly and toxic and the thing none of us want to be part of,” he said on the Howard Stern Show, adding that it, "F**king hurt and angry and felt like a fool.”

Thankfully, they found their way back to each other 15 years later and they now seem to be happier than ever.

Speaking to Rolling Stone, J.Lo explained that they don't intend on breaking up for a second time: "I don’t think we would have got back together if we thought that was where it was headed."

"We feel like what we found again is so much more important, and how we protect that and how we live our lives—what to share, what not to share—is the balance that we have now."

You can't deny that—just last week the pair attended the premiere of Marry Me, with Lopez even going so far as to wear a wedding dress from Giambattista Valli's Love Collection.

Granted, the dress was likely in reference to the major wedding plot point in the film, but still—who knows what the future holds for these two... 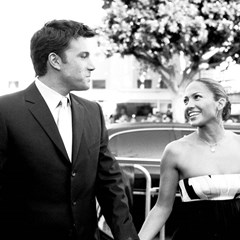 The Complete Relationship Timeline Of Jennifer Lopez And Ben Affleck

Everything We Know About Jennifer Lopez & Ben Affleck's Upcoming Nuptials

The Complete Relationship Timeline Of Jennifer Lopez And Ben Affleck

Bennifer's Back: These Jennifer Lopez And Ben Affleck Kissing Photos Have Warmed Our Heart

JLo And Ben Affleck Have Reportedly Been Exchanging Romantic Emails

17 Years Later, Ben Affleck Finally Reveals Why Jennifer Lopez Broke Up With Him In 2004

Aptly, Jennifer Lopez Dressed Like A Queen At The D&G Alta Moda Show In Venice

Jennifer Lopez Opened Up For The First Time During Her New Ben Affleck Relationship: “It’s The Best Time Of My Life”