When Bridgerton was first released in December 2020 there were two key things that dominated public discussion—Regé-Jean Page (for obvious reasons), and the show's multitude of, well, very steamy sex scenes.

Fast-forward 15 months and finally, the second season of the record-breaking show finally dropped on Netflix. Once again, fans flocked to see the snapshot into the lives and loves of Regency Mayfair. But this season proved to be a little different.

Yes, the sexual chemistry between the season's protagonists (Kate Sharma and Viscount Anthony Bridgerton) was high as ever, but the sex scenes were... non-existent... almost.

Over the eight-episode series, Anthony (Jonathan Bailey) and Kate (Simone Ashley) battle their undeniable chemistry with longing looks, suggestive hand-grazing and explosive fights. Eventually, it all builds up to a point where they simply can't deny their feelings any more. Anthony ends his engagement with Kate's younger sister, Edwina and eventually hooks up with Simone. It's cute, it's predictable and it's a less-horny version of season one.

But fans were quick to point out that there wasn't much rhyme or reason to the season excluding sex scenes given the book it was based on, the second in Julia Quin's bestselling series, was just as, if not more sex-clad than the first.

Another wrote: "This season of Bridgerton has no hot male main characters & no steamy sex scene.. wth am I watching?"

But others actually commended the show for portraying a love story without needing to use erotica as a form of hooking the viewer in (at the end of the day, a lot of people say they do watch the show for the plotline after all...)

"I honestly don't understand the complaint regarding Bridgerton season 2 having less sex. Like who cares? The romance is good. That's what matters. I love the 2005 Pride and Prejudice movie and there are no sex scenes in that," one reasoned.

Another added: "I am not mad AT ALL about the lack of sex scenes in season 2. To be honest I didn’t care much for them in the first season. There is something so much more impactful about the fiery hidden infatuation btw #anthonybridgerton and #KateSharma. This taboo longing."

Why were there less sex scenes in season 2?

Essentially, the answer comes down to Bridgerton's way of putting the female gaze first. Essentially, the show is based around this, so by making another season filled with sex scenes for the sake of it (based on the characters it focussed on), this element would have been largely redundant to their arcs.

The show's intimacy coordinator, Lizzy Talbot affirmed that season two always set out to be different.

"In this season, it was going to be about enemies-to-lovers, the intense build up, and the space between—the electricity that's happening in the space between these two characters and watching that slowly draw closer and closer together," she explained in an interview with Glamour.

She added that because Kate seemed more comfortable, more aware of sex than season one's lead protagonist Daphne, it allowed more freedom for her character development.

"It's not about what [Kate and Anthony] are learning—it's about what they desire. They already know what they want, so that leads a whole lot of the choreography."

And despite their characters being a little... friskier in the book, the TV adaptation's showrunner Chris Van Dusen said that the build up of sexual tension between the two was palpable—and therefore, it kept viewers hooked for longer.

"It was incredibly dynamic and exciting, having those steamy scenes and all that angst and all that yearning and watching their chemistry build and build really makes the payoff worth it when we get there," Van Dusen explained to The Hollywood Reporter.

He added: "We never do a sex scene for the sake of doing the sex scene, and we never will,” he says. “All the intimate scenes, they have a larger purpose. They’re all telling a story and they’re all pushing the story forward."

The eventual sex scene between Kate and Anthony was very slowly plotted out, as well. Per THR, Ashley and Bailey had a Zoom session with the episode's director Cheryl Dunye where the broke down the scene shot by shot.

"There were zero surprises, and then we could just focus on bringing the love story to life. I felt very, very comfortable." 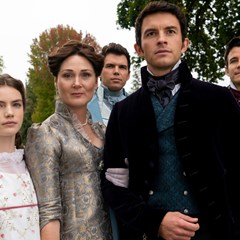 The Viscount Has Meme'd Me: The Best Tweets & Memes From 'Bridgerton' Season 2

Everyone’s Favorite Pulse racing Duke Is Back: What Regé-Jean Page Is Up To Now