Gaslit was destined for great things the moment Julia Roberts and Sean Penn signed on to the series.

Currently rolling out on Stan, the salacious new series follows Martha Mitchell (Roberts), one of the key whistle blowers of the Watergate scandal in the 1970s. As the shocking events of Watergate unfolded, Mitchell's husband John Mitchell (Penn), the then attorney general of the US, is caught up in the middle of it. He was later sentenced to up to eight years in prison for his role the break-in and cover-up.

The first of the eight-part series has already dropped, with each actor's transformation revealed—and none is more surprising than that of Sean Penn's, who looks unrecognisable as the republican.

Indeed, as seen onscreen, Penn was decked out in a full prosthetic face along with a balding head.

Speaking about the transformation, Roberts revealed in an interview that Penn spent hours longer in hair and makeup than she ever did.

"When I got to work, he would already look like John Mitchell, and then I'd be gone before he was transformed back into Sean Penn," she told E!

Meanwhile, the show's creator Robbie Pickering added that when Penn was cast, he insisted that he wanted to look as authentic as possible.

Roberts has also said that she only agreed to play Martha if Penn could play her husband in the series.

"I just thought [it] would be intriguing to Sean, and lo and behold, it was," Roberts said, per USA Today.

"He's great at portraying anything, but the idea of seeing him really inhabit and have this complete and total internal and external transformation into John Mitchell, it's pretty astonishing. To be up close to that every day was remarkable."

Gaslit on Twitter: "The truth is worth the risk. See what's ahead on this season of #GaslitSTARZ. pic.twitter.com/xr6HyZkE7b / Twitter"

Who was John Mitchell?

John Mitchell was the Attorney General of the United States under President Richard Nixon, remaining in office from 1969 until he resigned in 1972, at which point he went on to manage President Nixon's re-election campaign.

When the Watergate break-in occurred in June that year, John went so far as to hire a former FBI agent to stop Martha from finding out about it. As Gaslit reveals, Martha did find out, and she leaked information about it as one of the key whistle blowers from the scandal.

As rumours swirled, John testified before the Senate Watergate Committee, claiming that he had no prior knowledge of the break-in. But in 1975, he was found guilty of conspiracy, obstruction of justice and perjury. He was sentenced to two and a half to eight years in prison and he was disbarred from practicing law in New York.

Estranged from Martha, John ended up serving 19 months of his sentence before being released on parole for medical reasons. In 1988, 13 years after he was found guilty, he suffered a heart attack on a sidewalk in Washington D.C. and died.

New episodes of Gaslit drop every week on Stan, login or sign up here. 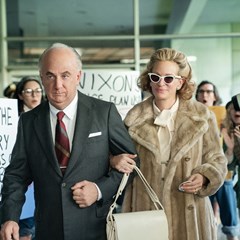 See The Characters of 'Gaslit' Against Their Historical, Real Life Counterparts

Who Is Martha Mitchell? Meet Julia Roberts' Latest Role As She Uncovers The Watergate Scandal

See The Characters of 'Gaslit' Against Their Historical, Real Life Counterparts

Which Streaming Service Is Your Perfect Viewing Match?

Julia Roberts And George Clooney Are Both In Australia, Joining The Legions Of A-Listers Who Are Down Under

Why Sarah Hanson-Young Believes Our National Consent Laws Fail Us

'Girls5eva' Season Two Has Officially Been Confirmed, Here's What We Know So Far

Julia Roberts Has Been Announced As the New Ambassador For Chopard

This New Romantic Thriller Is Perfect For Fans Of 'Deadly Illusions'

Why Elle Fanning Is About To Become Your New Obsession