Kate Middleton has revealed she still gets "broody" despite previously saying her and William wouldn't have any more kids.

The Duchess of Cambridge touched down in Copenhagen, Denmark on this week where she's undertaking a solo royal tour as part of her commitments to early childhood development and education.

Her first stop was a visit to the Copenhagen Infant Mental Health Project, an organisation which aims to support and promote better relationships between babies and their parents. While she was there, she met several families involved in the organisation.

PEOPLE reported that at one point, Kate admitted: "It makes me very broody. William always worries about me meeting under one-year-olds. I come home saying, 'Let's have another one.'"

Emily Nash on Twitter: "The Duchess of Cambridge, visiting the @LEGOfoundation PlayLab in Copenhagen, is persuaded to try the slide! Wait for it.... #royalvisitdenmark pic.twitter.com/EtxEbW5tpD / Twitter"

The Duchess also made the most of the organisation's utilities, even going so far as to have a go on a play slide. An enthusiastic start to her royal tour, to say the least.

Indeed, Kate's affinity with children is undeniable, and its reflected in the dedicated work she's done with her Early Year Foundation.

Her first ensemble on the Danish royal tour consisted a chic red double breasted blazer from High Street brand, Zara. She added a pair of black slacks and a small handbag, accessorised with pearl earrings and a necklace.

Kate's overseas visit will largely consist of meetings with some of the country's early child development organisations. Per a statement she shared shared prior to her trip: "Denmark is a beacon of best practice in its approach to the early years, with a culture which prioritises the best start in life." 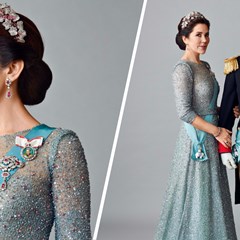 Five Moments You Missed From The Queen's Platinum Jubilee Weekend

The Most Regal Royal Moments From Trooping The Colour 2022