Blame every previous season of Married At First Sight for the reason we had less than zero hope for the outcome of any bride and groom relationship in season nine.

The show is renowned for producing enough drama to make even Real Housewives would blush, but it sure isn't famous for its expert match-making. That said, there is some miraculous hope this season—at least, that's what the final weeks have promised.

Indeed, the likes of Domenica and Jack and Ella and Mitch look like they're a shoo-in for a long-term relationship, but one couple still has us stumped—Selina Chhaur and Cody Bromley.

The pair's wedding day (AKA, their first date) foreshadowed the bumpy ride ahead when Cody thought Selina was coming on too strong. In reality, the situation was pretty highly strung (they were literally getting married at first sight, after all), so we couldn't really blame Selina for some of the in-depth questions she asked of Cody.

Then, Cody's hugely problematic admission that he didn't find Selina as attractive as other women because of her Asian heritage understandably drove an even bigger wedge between them. Still the pair remained together, though not without a few road bumps along the way (most of them sparked by Cody's behaviour, we'll add).

So with this in mind, viewers are now asking the question: Are Cody and Selina still together now? Here, we reveal their fate.

Are Cody and Selina still together?

While many were rooting for the couple to stay together despite their tumultuous journey, the pair sadly split mere hours after the dinner party reunion.

In January this year, the pair were spotted out in Adelaide, according to The Daily Mail. The pair appeared to be enjoying each others time in Selin's hometown, but unfortunately their joy was short-lived.

During the final commitment ceremony, Cody revealed he had called time on the relationship due to his inability to be affectionate, and the concerns this raised over his future with Selin.

“Last night it got to the point where Selina was grabbing my hands and placing it and to me that felt very forced,” Cody explained, to the surprise of the experts. “It was just a realisation and it’s for the best.”

Selina was noticeably devastated, revealing that the pair had plans to move in together and that she was ready to relocate to Sydney to be with Cody.

“I just feel silly because I thought this was love,” she said, through tears.

Unsurprisingly, the entire nation is backing Selina and encouraging her to go forth and find a real, true love of which she is undoubtedly deserving. 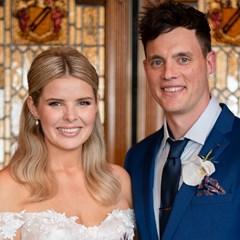 Are Jackson & Olivia Still Together After 'Married At First Sight'? We Look At The Clues