Of all the couples from Married At First Sight this season (or on any season, actually), Olivia Frazer and Jackson Lonie have been the most controversial.

That said, the vast majority of said controversy has come from Olivia, whose tension with another bride, Domenica Calarco, reached a problematic point in mid-March when she distributed a naked photo around the contestants from the show without Calarco's consent.

Afterwards, Calarco even confirmed she's looking at taking legal action against Olivia for her actions, and the rest of Australia are standing behind her.

But one person who has remained on Olivia's side—Jackson. The 30-year-old told media that they stand by their actions, even hinting that the show's heavy editing might have warped the truth.

"I challenge anyone if they want to know who we are. Come have a beer with us and get your own opinion," he said.

So, are Olivia and Jackson still together?

After everything, Olivia and Jackson have stayed together after they finished filming Married At First Sight and pledging their commitment to one another during the final vows.

"I'm so grateful that I met you. You are amazing to me. I want to make you feel special every day, just like you deserve,' Jackson told Olivia.

Olivia then told Jackson, "From the second I met you, I knew that you were something special, and it felt as if I'd known you forever. Even as I was walking down the aisle to marry a stranger, I felt so much at ease."

Of course, the pair have shown a couple of cracks throughout the season. Olivia's controversial actions did concern Jackson, who told his 27-year-old TV "wife" he thought she was "mean" after the altercation with Domenica.

"I don’t like snide comments... you’re not being picked apart. It just took me aback," he told her.

Despite their rocky relationship, the pair are taking things to the next level and have officially moved in together along the NSW Central Coast, with Jackson relocating from Melbourne to make it happen. In an interview with New Idea, Olivia also revealed that the pair are thinking about starting a family together, but want to tie the knot (for real this time) before making that jump. 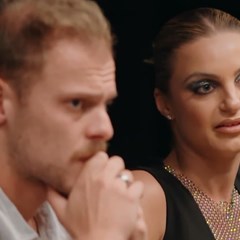