For those of us who chose to switch on our televisions at 7.30pm on Sunday through to Wednesday over the past two months, our perseverance in practicing patience is at an all-time high.

Indeed, the beginning of the year is always dedicated to Married At First Sight here in Australia—even for those who choose not to watch it as it's splashed across magazine covers, social media and beyond.

And each and every year, we watch as more and more couples marry, squabble, then ultimately break up. The proof is in the numbers—before 2022's season, six out of 71 couples paired together on the show are still together today.

So out of eight seasons, only 12 people have come out of it coupled up—you can't really blame us for going into season nine with little to no hope.

Well, that was until we met beauty influencer Domenica Calarco and financial planner, Jack Millar, both of whom appeared to be the walking talking epitome of Dr. Suez's old saying: "We are all a little weird and life's a little weird, and when we find someone whose weirdness is compatible with ours, we join up with them and fall in mutual weirdness and call it love." 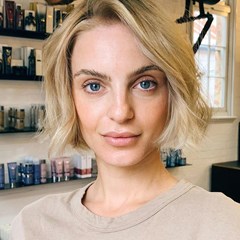 It all started with a dog at the wedding. His name was Finn and he stole the show—and Domenica's heart.

Whille Finn's loyalty was firmly devoted to his owner Jack, the bride was more than happy to share the day with the pup since she's a huge dog lover herself—and even has her own pup, Millie—as she keenly told her new husband.

Next, the pair quickly bonded over their shared Italian heritage, and then the fact that both of them were vegetarians. It was all a very promising start for the newlyweds.

Of course, no relationship is perfect, and the first hurdle posed itself at the first commitment ceremony. After attempting to initiate sex with Jack to no success, Domenica brought up her insecurities around their sexual relationship, telling the experts that she feared Jack wasn't attracted to her.

But like any successful relationship, Domenica proved the power of communication. Both talked it out and were content with where they landed—and they both chose to stay for another week.

Later in the season, Domenica's on-screen feud with another bride, Olivia Frazer became a major sticking point to the show (and justifiably cancelled it in the minds of many). It began when Domenica shattered a wine glass in a fit of rage after engaging in a brawl. Later, Olivia obtained and shared a nude photo of Domenica from her OnlyFans account, an abhorrent act that could potentially have consequences.

Through it all, Jack remained Domenica's number one supporter.

"I'm aware — I don't really care," Jack said of the image circulating of his wife.

"Who cares. I've been aware of this from week one or two. I think what's more concerning is how is it circulating?"

When the episodes went to air, both Jack and Domenica shared pictures of themselves together with captions: "My only fan." and "The Only-fan I care about."

Are Domenica and Jack still together?

To the devastation of everyone, Jack and Domenica arrived at the reunion party separately and confirmed the news we'd all been fearing - they have broken up.

It came as a shock, as the pair had committed to giving things a try in the outside world during their final vows.

"You have shown me time and time again how empathetic, caring and everything else you can be, and you’ve always been there to put a smile on my face," Jack told Dom. "You have made this one of the most incredible experiences of my life. I would love to continue this relationship in the outside world because I truly do believe we have something great."

"You are a one in a million guy, I’m hoping we can continue what we have into the real world because right now it is too special to let go," she told him.

With the final vows being filmed in November 2021 and the reunion episode shot in January 2022, we know that things have gone awry for the pair at some point between them. As the episode unfurled, it became clear that the breakup was due to a miscommunication of some kind, with both Dom and Jack feeling that the other was disinterested in the relationship.

"It's unresolved. If they keep talking they’re going to get back together," said expert Mel Schilling as the exchange unfolded during the reunion.

To add even more confusion to the mix, The Daily Mail shared very recent photos of the pair looking cosy and cuddling up during a body-positivity party which was seemingly directed at Olivia, who had major beef with Domenica during the show. It's very unclear what's going on with these two, but it's obvious that they have something special. We can only hope that over time, they decide to work things out and give it another try.

Are 'Married At First Sight' Couple Al And Samantha Still Together? We Break Down The Clues

The Finale Of 'MAFS' 2021 Was Full Of Shock Moments