There's plenty of controversy on Married At First Sight this season, but there's one character who's brought a vibrancy to it all—Al Perkins.

The 25-year-old carpenter married fashion brand manager Samantha Moitzi in a wedding ceremony filled with ups and downs—the ups firmly on Al's part (namely when he performed the worm). See, when Samantha first met her groom, she had hesitations about the fact he had never had a long-term girlfriend.

She was also concerned to hear via Al's mother that she did all of his cooking and cleaning, up until he filmed MAFS at least. Cue Samantha's quote: "I wanted a man, not a boy."

But Al wasn't one to be swayed. At three weeks in, he remains determined to disprove her hesitations, and during one particular episode, he gained the popular vote by proving that communication is key to a strong relationship. After telling Samantha that she was first on his list to date out of all the brides—while he was third on hers—they talked through their concerns, and next minute, they were happily kissing.

But despite the fact their relationship appears to be back on track, it pays to note that filming took place late last year, meaning several months have now passed since the moment.

Thus, it begs the question: are they still together? Below, we investigate.

Are MAFS' Al and Samantha still together?

While both Al and Sam have kept very mum on the status of their relationship, there's hope they might still be together considering they both follow each other on Instagram (at the time of writing this).

To add, it appears Al at least is still filming scenes for the show—a series of images obtained by the Daily Mail in February reveals the groom accompanied by another woman, whom the publication claims is a producer on the show.

Fans of MAFS will know that as filming wraps (which we suspect it mostly has by now), the cast also get back together for a reunion—but going by his casual outfit, it looks as though Al could have been filming another scene... maybe with Samantha?

Married At First Sight on Twitter: "Kiss and make up 😘 Stream every #MAFS moment free with @9Now! pic.twitter.com/4wTcytMweC / Twitter"

Of course, there's also the possibility Al and Samantha are simply on friendly terms, hence the Instagram follow, but we're hopeful the pair could make a solid couple.

Al is described as having a big heart, and with communication already proving to be a strong suit of his, perhaps he's actually the perfect match to mesh with Samantha's individual, determined nature. Stay tuned... 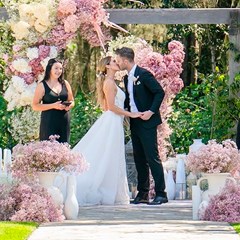 The Finale Of 'MAFS' 2021 Was Full Of Shock Moments