Warning: This story contains major spoilers to And Just Like That episode 1.

It's a tale that will go down in modern history—not unlike the story of Titanic's Rose, Jack and the door—Carrie Bradshaw's omission to call 911 immediately after finding Mr. Big suffering a heart attack in their New York City apartment.

Yes, the shock ending to the first episode of the spin-off series, And Just Like That was drenched in debate as fans begged the question as to why Carrie wouldn't immediately call an ambulance for her husband after she found him close to cardiac arrest on their bathroom floor. Instead, she lay in the shower and hugged him as he died in her arms.

Now, Sarah Jessica Parker has offered a reason as to why Carrie did what she did—so are we finally convinced?

In a new interview on Watch What Happens Live With Andy Cohen, Parker admitted that she understood why fans were up in arms about the scene, but she also reiterated that Carrie did call 911, just not straight away.

"Of course she called 911! Didn't you see the people behind, moving the body out?" She said, referencing one of the first scenes in episode 2.

But as for the heavily delayed reaction, Parked explained: "I always think of that particular moment, as there have been a few in the show in its previous title, that it's suspended animation. It's this moment where everything stops."

She continued: "We can walk through this together, shall we? In my head, she struggled through this moment and tried to get him to be responsive. And then she, you know, came to her senses—I'm gonna say after about two to three seconds. Then, of course, she called 911 and got all the help she needed from professionals."

And Just Like That/Sex And The City - Big Dies

Her reasoning is all very well and good, but is it convincing enough for us to believe Carrie was simply "suspended" and needed a few seconds (crucial, crucial ones at that) before she thought to call 911? It's possible, though it doesn't take away the fact it's frustrating to watch.

In fact, Vulture went so far as to interview a cardiologist who in no uncertain terms said Carrie's delay was definitely the difference between life and death.

So there you have it—yes, Carrie had her reasoning for delaying the call, but the scene will forever remain just as tragically frustrating as Jack and Rose's, um, Titanic oversight. 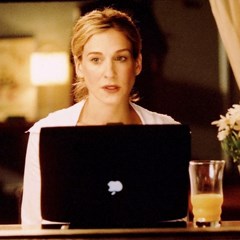 Candace Bushnell Just Revealed Her Nineties Columnist Salary And Carrie, We See You

And Just Like That, The 'Sex And The City' Reboot Is Officially Back For Season Two

For A Show That Claimed Not To Want Her, 'And Just Like That' Was Fixated On Samantha

And Just Like That, You Can Get Your Hands On Carrie Bradshaw’s Iconic Fendi Baguette

Instead Of 'Sex And The City', Kim Cattrall Found Another Reboot To Star In

A Sneaky New Set Photo From 'And Just Like That' Basically Confirms Carrie & Mr. Big Are On The Outs

Sanderson Sisters Unite, The Trailer For 'Hocus Pocus 2' is Here And It’s Spooktacular