The award-winning drag queen celebrates three women who have influenced her life.

Growing up queer, most of my role models were women, like the Spice Girls and Fran Drescher. I always saw role models in more of a pop-culture sense. Now, the women who inspire me most are ones who’ve helped me grow.

I stumbled across Esther Perel’s podcast Where Should We Begin when I was living in the UK, and instantly devoured it from start to finish. I’ve always found psychology and the human condition fascinating. Listening to these couples each tell their side of the same story made me realise that – when we communicate – things can be heard completely differently depending on who’s listening.

Esther is pretty progressive in the way she talks about infidelity, sexuality and topics that some find uncomfortable, but she communicates her ideas in a fairly moderate and palatable way that everyone can understand. That’s something I’ve tried to do in my work. The way she manages to lead people to outcomes is just fascinating because there’s no dogma, no spin. She’s a psychotherapist [so] she knows how to cut through the bullshit and deliver the message with clarity.

“Think of this as a paradox to manage, not a problem to solve” is a quote of hers that I love. When you understand that you can just let something be and manage it rather than trying to fix things all the time it’s very freeing. 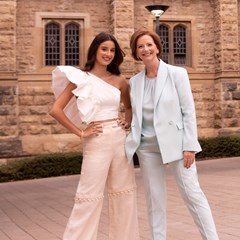 I met my manager Wendy in 2003 when I was on the first season of Australian Idol and she was a rep on the tour. A few years later I reached out to get her help negotiating a contract for the musical Rent and we’ve been working together ever since. She’s been such a strong, guiding force in my life and my teammate for the past 15 years. I affectionately refer to her as “purse-strings Wendy”.

She has taught me a lot about integrity. In my younger cabaret years, I was always trying to hammer a message into my performances. I remember her saying to me once, “You are the message.” That was an “ah-ha” moment for me because I realised that just by being me and existing in the mainstream is already powerful.

When I was in the Celebrity Big Brother UK house [in 2018], Wendy was watching at home in Australia. As soon as she saw it all going right she jumped on a plane to London and when I got out of the house as the winner she was there with a million days of meetings set up. Even though I was extremely hungover I realised how lucky I am to have somebody I know I can rely on, no matter what. I could call her anytime and she’d help me bury the body. And vice versa.

You might not think that an atheist drag queen and a hijab-wearing Muslim woman would have instant chemistry, but when I met Yassmin at a youth leadership forum I thought she was the coolest person. We’ve been friends ever since. She’s a polymath and one of the most impressive people I’ve met. She was an engineer working on oil rigs, she’s written children’s books and a memoir and she’s also an amazing speaker and advocate for her community. I always find it really inspiring the way she is so passionate about everything she does.

We both grew up in Brisbane but we couldn’t be more different. And yet there is never any conflict. She is so open and eager to learn more about my experiences and makes me feel supported and also challenged.

We’re advocating for different things but it’s interesting because there are often parallels between different com­munities that are fighting for change and acceptance. Sometimes oppression and unconscious bias can manifest in similar ways. I love being able to share insights.

Maeve Galea
Maeve Galea is a freelance writer. When she's not reading Malcolm Gladwell books (or listening to his podcast), you'll find her sipping mimosas and/or doing a face mask.

Australian Actress Maddison Brown On How Life Has Changed Since 'Dynasty'

Turns Out, America Only Just Discovered The Electric Kettle & The Internet Is Going Wild

The Most Poignant Celebrity Reactions To Roe V. Wade Overturned

All The Times Celebrities Have Spoken Candidly About Miscarriages

Roe Is Gone. We Have to Keep Fighting.

Rupert Murdoch & Jerry Hall Are Divorcing. What Does That Mean For Their Fortunes?