As we get more settled into 2022 and begin to creep close to February, it can only mean one thing—the return of our favourite reality TV shows.

While there is a plethora of drama-filled content to devour in the new year, gasp-worthy Married At First Sight piques our interest the most. And honestly, there's nothing quite like a brand-new cast list to get our reality-loving blood pumping.

Now, almost two weeks before its January 31 premiere on Channel Nine, we finally have the official low-down for the brides and grooms we're about to meet for the show's ninth season.

Ready for wine throwing and shocking dinner parties? Same. So, there's no better time to meet the men and women who are expected to wed this year.

Scroll on for every Married At First Sight Australia 2022 contestant set to join us onscreen.

A 28-year-old makeup artist from Sydney, Domenica is described as being a "pocket rocket, an outgoing, feisty and passionate Italian". As per 9Now, "[she] stands up for what she believes in and protects those she loves—you don't want to get on her wrong side", and one look at the trailer would confirm as much. She's been married before, however the relationship didn't work out, so she's hoping to find a husband who also wants kids and to create their own big Italian family.

A 27-year-old beautician from Victoria, Ella hasn't been in a relationship for nine years. She's in tune with her sexuality and loves the idea of love, she's also ready to find someone who "will be her best friend and biggest fan", as per 9Now. She's both extremely loyal and faithful, and she wants a life partner who will commit to her.

A 36-year-old cinema manager from New South Wales, Holly is incredibly keen to meet the love of her life so she can finally start the family she longs for. She previously thought she had found her soulmate in a past relationship, but was heartbroken when he revealed that he didn't want children.

A 27-year-old teaching student from New South Wales, Olivia has "struggled with low self-confidence for years", as per 9Now. When she was 22, the network states that she lost 50kg through gastric sleeve surgery but her dating life came to a halt when she became a carer for her terminally ill father. Now, the romantic Olivia is ready to meet The One.

A 26-year-old fashion brand manager from Queensland, Samantha is both strong and independent with a passion for excelling at her career. According to 9Now, "she thought she and her partner of almost seven years would get married, but he cheated on her", leaving her with trust issues. She hopes to find an older man who loves her ambition and self-sufficiency.

A 32-year-old executive assistant from New South Wales, Selin is a single mother with an almost three-year-old son, and her onscreen wedding will be her first date since his birth. She hopes to leave behind her "mum guilt" while she looks for love to find a "good man" who'll fit into her "close-knit, loud Turkish family" and will be honest and faithful.

A 32-year-old hairdresser from South Australia, Selina is half-Cambodian and half-Chinese. She is the "self-proclaimed black sheep of her family because she didn't become a doctor or a lawyer", pursing her love of hairdressing instead. According to 9Now, Selina says that if "her parents had their way she would already be married to an older, wealthy Asian".

A 29-year-old operations manager from Queensland, Tamara describes herself as an "alpha personality", and is self-assured, confident and outspoken. She has high expectations for her partner and is looking for someone to match her on all levels and not be intimidated.

A 25-year-old carpenter from New South Wales, Al is both loveable and cheeky but has never been in a serious relationship. Still living at home with his mother, he relies on her to cook meals, clean the house and wash his clothes. Despite being the life of the party, he apparently has a fear of being rejected. Coming from a family of five sisters, he's is comfortable around women and hopes to find a wife to ground him.

A 39-year-old motivational speaker and personal trainer from New South Wales, Andrew is a "larger-than-life, straight-talking Texan with a passion for helping others", as per 9Now. Andrew has been divorced twice before and moved to Australia four years ago with his second wife, whom he shares a two-year-old daughter with. He's looking for a wife who can match his spontaneous personality, has a sense of humour and has good banter.

A 38-year-old sales associate and pro wrestler—going by the name of "Tommy Hellfire"—from Victoria, Anthony clocks in at a whopping 1.93 metres (six-foot-four) tall and is the epitome of "tall, dark and handsome". Looking for someone to match his drive for life and match him emotionally and intellectually, he hopes to find someone who also adores his nine-year-old daughter.

A 33-year-old hospitality manager from New South Wales, Brent is "confident, charismatic and sociable" and even lived in Dubai for seven years while running an event management company. Returning to Australia due to the pandemic, he wants to rebuild his life with the right person. And by right person, he means someone with well-kept feet, apparently.

"I'm really uncomfortable around feet," Brent explained in the show's trailer, adding, "It freaks me out."

A 30-year-old swim coach and personal trainer from New South Wales, Cody is easy-going and loves to spend afternoons at Sydney's Northern Beaches with friends. During his twenties, he travelled the world but now that he's turning 30, he wants someone to share life with. Tragically, he lost his father when he was 15 years old, which resulted in him avoiding relationships and becoming uncomfortable with PDA, such as holding hands.

A 26-year-old financial planner from New South Wales, Jack tends to be the "voice of reason, a peacemaker with a great moral compass", as per 9Now. He spends weekdays working in corporate finance but at heart, he's passionate about music and adventure and is looking for someone who feels the same—and who loves his best friend, his dog, Fynn.

A 30-year-old plumber from Victoria, Jackson describes himself as the "class clown", who is outgoing and upbeat. Growing up as the eldest of five children, he had to take on the role of protective older brother to his younger sisters and mother in the face of aggressive stepfathers. Coming in at six-foot-three, Jackson apparently wants a wife who has "nice eyes and a smile and hopes his bride is smaller than him".

A 26-year-old financial planner from Queensland, Mitch also works as a part-time model on the Gold Coast. According to 9Now, he's never spent "more than two consecutive nights with a girl in his life". While many assume that he's a "party boy", Mitch is introverted and enjoys his own company the most. Sick and tired of online dating, he hopes that the social experiment will help him find a genuinely committed relationship.

Season nine of Married At First Sight Australia 2022 will premiere at 7:30pm on January 31 on Channel Nine. 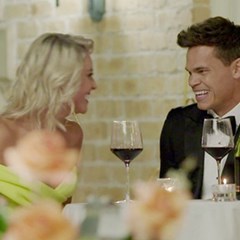 Everything We Know (So Far) About 'The Bachelor' Australia's 2022 Season

Turns Out, America Only Just Discovered The Electric Kettle & The Internet Is Going Wild

How The Indie Sleaze Aesthetic Made Its Triumphant Return

All The Times Celebrities Have Spoken Candidly About Miscarriages