Pamela Anderson and Tommy Lee's quickie wedding in 1995 was already one of the biggest entertainment stories of the decade.

When their sex tape was leaked —a traumatic moment for Pamela particularly—their relationship became one of the defining pop culture moments of the decade, so much so that Hulu decided to immortalise it via the limited series, Pam & Tommy.

Released on February 2, 2022 via Disney+, the series delves into the origins of the sex tape, how it eventually got leaked online and the impact it had on the people who made it, Pamela Anderson and Tommy Lee.

Playing the title roles are Lily James and Sebastian Stan, whose portrayal of Anderson and Lee is striking as they wed three days after meeting, produce the sex tape, then tackle the ins and outs of marriage as one of the world's most talked about couples.

We all know what happened to the couple's marriage in real life as history (and multiple news outlets) will tell us, which we'll get to, but we're also interested to find out exactly what they're up to now.

Pam & Tommy will premiere on Disney+ from February 2nd with new episodes dropping weekly. You can sign up to stream the series, here.

How did Pamela Anderson and Tommy Lee's sex tape get leaked?

After meeting at a New Year's Eve party in 1994, Pamela and Tommy wasted no time in making things official—they were married on a beach in Cancún just 96 hours later.

In the weeks following their surprise nuptials (which made headlines across the world) they decided to film a sex tape which they hid in a safe, locked away in their garage.

While he initially struggled to distribute the tape without the consent of Pamela and Tommy, it eventually leaked into the media and within a few months, the infamous couple's intimate recording was viewed by millions of people across the world.

It marked the beginning of a new, and troubling era for celebrities, whose most private moments had the potential to be spread far and wide across the internet.

To this day, Pamela claims she has never watched the tape herself, and she never intends to do so.

How long were Pamela and Tommy married for?

Pamela and Tommy were married for three years, and during they time, they welcomed two sons: Brandon Thomas Lee, 25 and Dylan Jagger Lee, 24.

The famous couple's rocky relationship wasn't a secret—in 1998, Tommy was arrested over an assault on his wife, and he later pleaded no contest to felony spousal battery. He was sentenced to six months in jail, and Pamela filed for divorce that same year.

In 2008, more than a decade after their divorce, Tommy Lee told Rolling Stone that the couple had rekindled their romance.

"Pamela and the kids have moved in with me," he told the publication, adding, "It’s awesome, man. It’s definitely working. You can tell on the kids’ faces—they’re happy when we’re together."

In 2010, the couple split up again—this time for good.

Where are Pamela and Tommy now?

While she was one of the most famous faces of the 1990s, particular after her iconic stint on Baywatch, Pamela has embraced a low-key lifestyle in recent years.

She starred on Dancing With The Stars several times, and she also appeared on the UK's Dancing On Ice in 2013.

Pamela also made headlines when she outwardly showed support for Wikileaks founder, Julian Assange, consistently claiming he was innocent.

"He's a good man, he is an incredible person," she previously told media.

"I love him, I can't imagine what he has been going through."

Now 54, Pamela married five more times following her split with Tommy Lee. First, she wed Kid Rock in 2006, then Rick Salomon in 2007, and again in 2013. She then married Jon Peters in early 2020 before splitting with him that same year.

Around Christmas in 2020, Pamela married Dan Hayhurst which a source described to Rolling Stone as a "pandemic whirlwind". But according to the publication, they split in January 2022.

Tommy, now 59, also lives a quiet life out of the public eye these days. He married actor Brittany Furlan Lee in 2019, and she often shares snaps of the pair together on Instagram.

Where are Pamela and Tommy's sons now?

Both of Pamela and Tommy's sons have gone on to pave their own paths in entertainment, with Brandon starring on a popular spin-off reality TV show, The Hills: New Beginnings.

Meanwhile Dylan has gone on to model for the likes of Acne Studios, Coach and Hugo Boss. He also launched Midnight Kids, a music project which produced several EPs before he left the brand in early 2021. 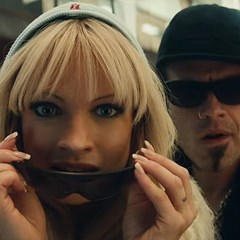 Why Pamela Anderson Has Become The Hero Of Her Own Story

Tate Donovan Says He Was "Dying Inside" While Filming 'Friends' With Ex-Fiancé, Jen Aniston

The Best Linen Bed Sheets In Australia, From Neutral Hues To Beachy Stripes

Everything You Need To Know About Disney+ Day This Year

25 Celebrities Who Have Revealed Their Battles With Their Mental Health