Warning: This article contains spoilers to And Just Like That... season one.

It may have divided the internet, or been the root cause behind explosive dinner-table debates, and sparked a revolt begging for justice for Steve Brady, but you can't deny there's something about And Just Like That... that keeps us coming back.

And perhaps that's the only motivation the show's producers need to create its second season, because as we now know, a new instalment is on the way.

Indeed, as the last episode of season one go to air across the world, many are questioning where Carrie Bradshaw's story will go next, if anywhere, not least because she's finally starting to get back into her groove after Big's death.

Here, we look at everything we know (so far) about the second season of And Just Like That...

Will there be a season two of And Just Like That...?

Have you found yourself craving some Che? Well, the comeback has officially been confirmed to, well, come back.

On March 22, And Just Like That... was finally renewed for a second season by streaming giant HBO Max.

“I am delighted and excited to tell more stories about these vibrant, bold characters—played by these powerful, amazing actors,” executive producer Michael Patrick King said in a statement, as per People. “The fact is, we're all thrilled. And Just like That… our Sex life is back.”

In February, Sarah Jessica Parker told Variety: "Michael [Patrick King, AJLT showrunner] and I spoke two weeks ago, and said: ‘OK, when are we going to talk about this?’ There’s a calendar and you don’t want to let too much time pass. There feels like there’s momentum."

To add, HBO's chief content officer Casey Bloys also commented that the show's ratings were above and beyond what they'd hoped.

"In terms of viewership, it’s been phenomenal. I couldn’t be happier with how it’s doing in terms of reception," he said.

In January, Page Six spoke to a source who claimed, "The creative conversations haven’t happened yet, but everyone is feeling good about the show."

"They may feel that they want to prove a point that they can make a second season stronger and that it was valid to bring it back for fans."

Last year, Us Weekly reported that plans for the second season were thrown into disarray after troubling sexual assault accusations were made against Chris Noth, who played the now-late Mr. Big.

"As we were working, it always felt like the beginning. It didn't feel like a beginning, middle, and an end. So I think it's possible to keep going—if we have enough good stories," he explained.

Meanwhile, some of the cast have let slip their own thoughts about a second season, with Sarita Choudhury, a newcomer to the franchise who plays Carrie's realtor, Seema, telling Entertainment Tonight in early January:"I would love a second season. Just the other day, I was thinking, I wonder. Because there's a point where they let you know if there is or not and we're not at that point yet."

Cynthia Nixon, who plays Miranda Hobbes on the show, also discussed the idea of a season two—though she avoided giving a straight answer.

"Even though I’m an executive producer and I got to direct an episode, I am not a writer. And so, that is one of the great privileges of being a writer, that it’s not my job to figure it out, thank god," she told the same publication.

Of course, this is the kind of news producers would keep under wraps until they were absolutely ready to announce it, so don't expect the cast to give too much away just yet.

What will happen in a possible second season of And Just Like That...?

Carrie spent most of the first season coming into her own again after the loss of her husband and long-term partner, Mr. Big. It's been an interesting arc to watch as the sex columnist returned to her roots—NYC studio apartment et al.—and tap back into some of her long-lost, yet familiar routines.

And while Carrie's romance with Peter the teacher seems to be over, that last scene with her podcast producer Franklyn certainly has legs—so, could a second season explore that relationship further? Or perhaps he's simply the trigger that gets Carrie back into the dating game? Here's hoping we find out either way.

Of course, we can't forget Miranda and Charlotte's storylines—both have evolved significantly over the first season. Miranda's split with Steve and new relationship with Che is clearly far from over, while Charlotte's storyline with her gender-fluid child Rose, who is now called Rock, has provided a unique insight into her family dynamic—one that we hope to see explored further.

Who will star in And Just Like That... season two, and will Kim Cattrall come back?

When the second season got the green light, the official announcement confirmed that Sarah Jessica Parker (Carrie), Cynthia Nixon (Miranda) and Kristen Davis (Charlotte) would each reprise their roles. But, while we wait for further cast confirmation, we also hope to see the return of Sarita Choudhury (Seema), Sara Ramirez (Che), Nicole Ari Parker (LTW) and Karen Pittman (Dr. Nya), who each brought refreshing new storylines to And Just Like That...

As for Kim Cattrall's potential return, it was understood the producers didn't have her character killed off or completely written out of And Just Like That's first season in the hopes that she may come back.

But now, it seems all hope there is dead in the water—from both sides. In January, the actress subtly shaded the reboot after liking a fans Tweet which labelled the show as "trashy" in comparison to Cattrall's new gig on Hulu's newly released spin-off, How I Met Your Father.

"So proud of @KimCattrall for skipping the trashy S&TC reboot and doing @HIMYFonHulu. She’s wonderful, and so is @HilaryDuff," the Tweet read.

Shortly after that, showrunner King told Variety that Cattrall's decision to step back made things clear: "You have to look at the reality of something: You can literally not make an actress play a part."

Then, when he was asked if the door would be "open for her to come back", he replied "no".

When could And Just Like That... season two be released?

Now that a second season has the green light, we can expect pre-production and filming to take several months. With that in mind, perhaps another December release could be on the cards—just in time for Christmas 2022. Fingers crossed...

Stream And Just Like That now on BINGE, live and on demand with a 14-day free trial. 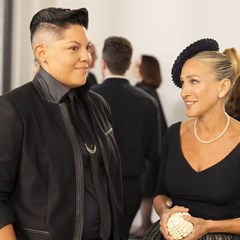 A Sneaky New Set Photo From 'And Just Like That' Basically Confirms Carrie & Mr. Big Are On The Outs

For A Show That Claimed Not To Want Her, 'And Just Like That' Was Fixated On Samantha

And Just Like That, You Can Get Your Hands On Carrie Bradshaw’s Iconic Fendi Baguette

Every OG Accessory From 'Sex & The City' That's Reappeared In Its Reboot, 'And Just Like That'

Cynthia Nixon Was Hesitant To Reprise Miranda In 'And Just Like That', But Came Back For One Key Reason

Fans Are Convinced Miranda Hobbes Is Going To Come Out As Queer In 'And Just Like That...'

Instead Of 'Sex And The City', Kim Cattrall Found Another Reboot To Star In